skip to main | skip to sidebar

Little Debbie products contain eggs from hens confined in tiny metal cages. These barren cages prevent them from engaging in many behaviors important to their well-being, and they are so small, they nearly immobilize hens for their entire lives. The practice of confining hens in cages has been outlawed in California and Michigan and condemned by public figures from Oprah Winfrey to Ellen DeGeneres to Pope Benedict XVI. Little Debbie competitors Sara Lee and Pepperidge Farm have started using cage-free eggs, as have dozens of other major companies (e.g. Burger King, Wendy’s, Denny’s, Cracker Barrel, and Hellmann’s Mayonnaise).

At the center of EBAA’s campaign—launched after McKee Foods ignored several attempts to engage in private communications about the issue—is the website LittleDebbieTorturesAnimals.com, which is a parody of the Little Debbie website. Viewers of LittleDebbieTorturesAnimals.com will see a graphic video detailing the cruelty inherent in confining hens in cages and are encouraged to contact both McKee Foods’ president, Mike McKee, as well as Little Debbie’s namesake – Debbie McKee-Fowler, whose grandfather founded the company and who now serves as Executive Vice President of McKee Foods.

EBAA is also sending copies of its new “Little Debbie Tortures Animals” leaflet to activists nationwide, who will distribute them at gas stations and grocery outlets where Little Debbie products are sold.

“Little Debbie could greatly improve the lives of animals in its supply chain simply by switching to cage-free eggs, as many other companies have started doing,” stated Shannon Campbell, president of East Bay Animal Advocates. “There’s no excuse for confining birds in such small cages that they can’t even extend their wings.”

EBAA has begun distributing thousands of our new "Please Don't Buy Little Debbie" leaflets nationwide. Animal activists throughout the country will be distributing them in front of gas stations, grocery stores and other outlets where Little Debbie's (battery cage egg-filled) products are sold.

(And remember: Please be sure to check your local ordinances about where you can and can't distribute it.)
Posted by East Bay Animal Advocates at 2:07 PM 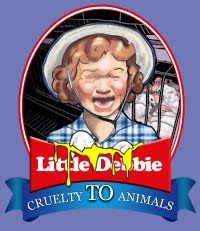 Following our success urging Pepperidge Farm to switch to cage-free eggs (see below), East Bay Animal Advocates began contacting other companies asking them to follow Pepperidge Farm's lead. One of those companies was Little Debbie (owned by McKee Foods). After repeated emails to the company president (Mike McKee) and other executives with no replies, we decided to launch a new web site: www.LittleDebbieTorturesAnimals.com. Please go there today and use the contact info to contact Mike McKee and the real Little Debbie (Debbie McKee Fowler), and urge them to switch to cage-free eggs. Thanks!

-Shani (shannon@eastbayanimaladvocates.org)
Posted by East Bay Animal Advocates at 9:13 AM

We received news that Pepperidge Farm is going to phase more than 2 million cage-free eggs into their supply chain! Thats about 2% of all their eggs! This follows countless emails and phone calls from EBAA members, generated through our website PepperidgeFactoryFarm.com, which we were thrilled to take down! Congrats to Pepperidge Farm and its parent company (Campbell Soup) for making this compassionate decision!
Posted by East Bay Animal Advocates at 10:40 AM

Many major companies have begun to use cage-free eggs, however Pepperidge Farm still exclusively uses eggs from caged hens. These hens live their entire lives crammed into tiny “battery cages” where they are barely able to move an inch. This practice is so cruel it has been criminalized in California, Michigan, and the entire European Union. EBAA has tried reaching out to Pepperidge Farm privately about this issue but instead of converting to cage-free eggs, the company just sent a form reply defending its suppliers' animal cruelty. Please let Pepperidge Farm know that these inhumane practices are unacceptable and ask them to go cage-free! More information is available at www.PepperidgeFactoryFarm.com

Thanks from everyone at East Bay Animal Advocates...

Battery cage confinement is one of the worst practices in factory farming, where hens are crammed into cages so small they spend their entire lives barely able to move. Please let the Cheesecake Factory know that you will not support this kind of animal cruelty, and that you request that they stop using eggs from caged hens.

The Cheesecake Factory’s home state of California passed The Prevention of Farm Animal Cruelty Act (Prop 2) which outlaws the confinement of hens in battery cages. Contact the Cheesecake Factory today and ask them to follow the lead of California voters by ending the use of eggs from caged hens in their products. More information can be found at: www.CheesecakeFactoryFarm.com.

Thanks so much!
Posted by East Bay Animal Advocates at 9:57 PM 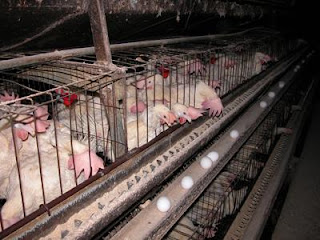 After helping to make Proposition 2 the most popular citizens' initiative in California history, banning inhumane confinement cages on factory farms, APRL, COK and MFA are teaming up to continue to take action against the cruel egg industry.

Many of us know Boca Foods as the company behind delicious vegan Boca Burgers and Spicy "Chicken" Patties. Unfortunately, while many of their competitors like Lightlife and Morningstar Farms have either eliminated or greatly reduced the amount of eggs used in their products, Boca has refused to make any progress on this important animal cruelty issue.

Please take two minutes to contact Boca Foods and ask them to eliminate or greatly reduce their use of egg products by visiting:

East Bay Animal Advocates
Through consumer education, corporate outreach, direct aid and legal research, our mission is to examine and analyze the impact of the California agriculture on animals.